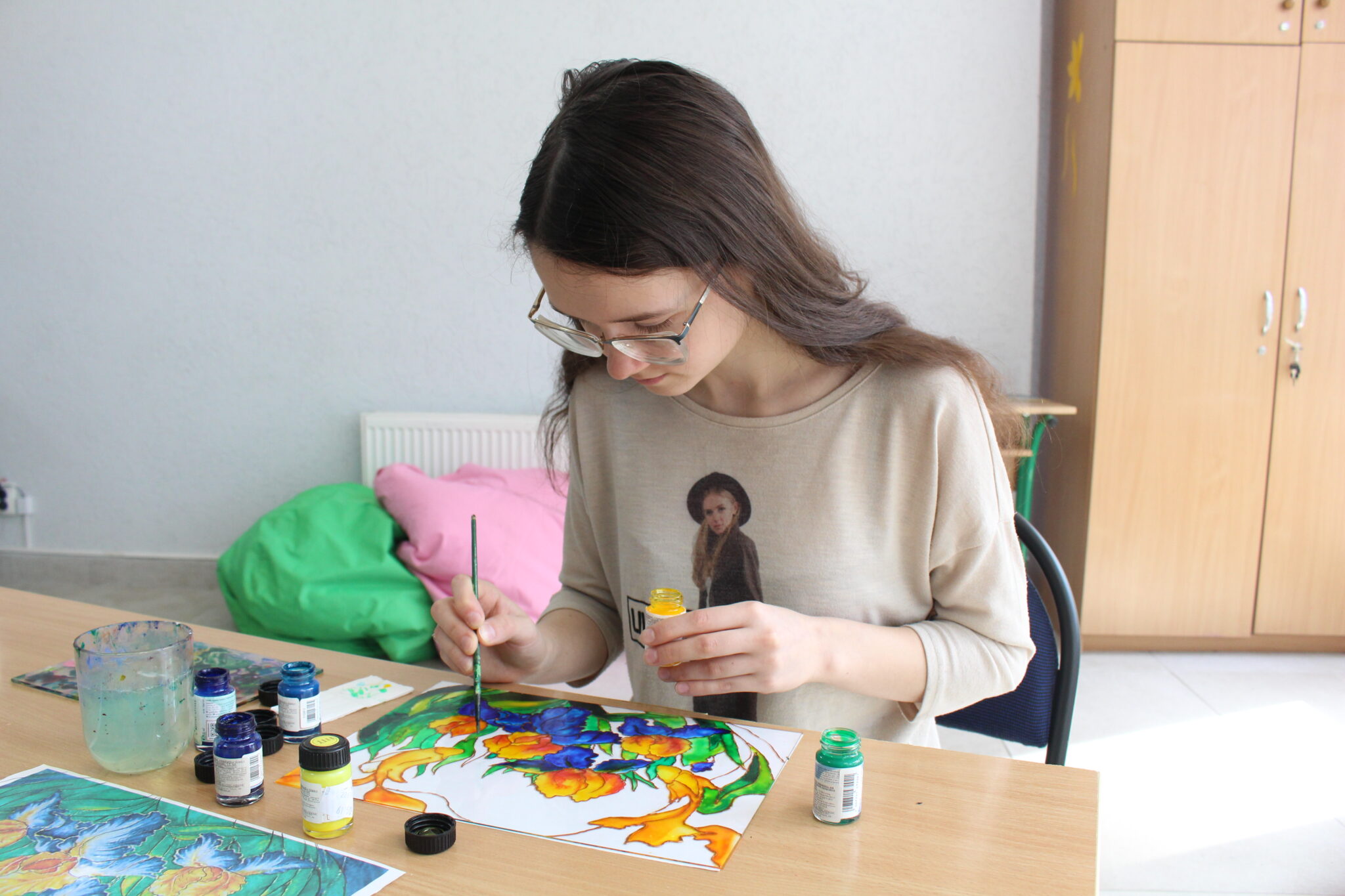 Almost for 17 years, since 2004, the Batik arts and crafts club has been working at the Ukrainian Institute of Arts and Sciences under the guidance of teacher Olga Chabakh. The main focus of the club was hand-painted fabrics using the batik technique. This term was used for naming the club.

Today the members of the club are not only students, but also teachers and other employees of the educational institution. For example, Maria Kurashkevich, a lecturer and laboratory assistant at the Department of Finance, Economic Cybernetics and Management, says that batik is the best way to relax after work. “Once I returned home and could not get rid of the thoughts and worries that were related to work. I remembered that drawing helped me to forget about everything, and went to batik. For me it became a kind of art therapy, because in half an hour I realized that I was thinking absolutely nothing, except about the contour line to come out straight, thin and accurate. And after the lesson I felt as if someone had reinstalled Windows for me, there were no unnecessary thoughts in my head and fatigue disappeared somewhere.”

Batik is a kind of creative design on fabric that is applied using special solutions. The island of Java (Indonesia) is considered the birthplace of hand-painted fabrics. In the 17th century, when Java became a Dutch colony, batik began to appear in European countries. This art form gained the greatest popularity in Europe only at the end of the 19th century, and the Europeans liked it so much that fashionistas began to wear clothes painted in the batik style. Now this technique is used by fashion designers when creating clothes; by designers – as an element of the interior in the form of various decor items; by artists to create paintings and similar.

The club has helped to develop creative abilities to more than one generation of students. Creating their works, the members of the club presented them to many fans of this art form. Therefore, today the works of UIAS students were published far beyond the borders of our country – these are the USA, Canada, Mexico, Poland, Russia and other countries.

But painting fabrics using the batik technique is not the only art that can be learned in the “Batik” club. What other types of art does the club offer?

It is a unique phenomenon, a real gem of folk art. Bright flowers, juicy berries, clusters of viburnum, unusual and fantastic birds – one cannot but recognize this painting at once. There are lovers of Petrikivska painting all over the world, so the usual Petrikivka village in the Dnepropetrovsk region has become famous far beyond the borders of Ukraine. And now Petrikivska painting also claims the status of a UNESCO world cultural heritage.

Stained glass is an ornamental or subject composition made of glass or other materials that can transmit light. All elements of stained glass painting on glass are made with special paints. The creation of such transparent paintings can be associated with batik or watercolor painting.

Graphics is a type of fine art characterized by the predominance of lines and strokes, the use of contrasts of white and black, and less than in painting, the use of color. The works can have both monochrome and polychrome colors. Drawing is still the most traditional type of graphics.

Rag doll is an ancient type of Ukrainian folk art. Such works often became amulets. The general view of a rag doll is a human figurine, usually a woman’s or a child’s, made from pieces of cloth. Parts of the body of such a doll were connected by knots.

The members of the club created more than 200 works of painting fabrics using the batik technique, 100 graphic masterpieces, more than a dozen Ukrainian dolls and similar. The works of the art club members can be seen at many exhibitions of fine art – for which the UIAS “Batik” club received a certificate from the Department of Culture and Sports of the Bucha City Council for active participation in city exhibitions and for the high artistic professionalism of the performed works. The members of the club have repeatedly received good reviews from people who attended the exhibitions, and from the Bucha press, which covered these exhibitions in their publications. Now in the reading room of the Ukrainian Institute of Arts and Science there is an exhibition of creative works of students, which is constantly updated.

Sometimes the members of the circle go on excursions to get inspired by works of art and get new ideas. Thus, once students visited an exhibition of paintings by Nikolai Kanevsky, who works in the genre of easel and monumental painting.

It has long been known that arts and crafts can be classified as one of the spheres of art therapy. Therefore, club classes have a positive effect on the mental state of a person, develop concentration, have a calming effect and help to calmly endure stressful situations, especially for students and teachers during the session. Regardless of knowledge and skills, students of all professional directions of the UIAS can enroll in classes, as well as teachers and employees – those who want to create beautiful things. Everyone can discover something new in art and reveal hidden creativity, aesthetic and artistic taste, imaginative thinking.

Read about other sections and circles of the UIAS here.